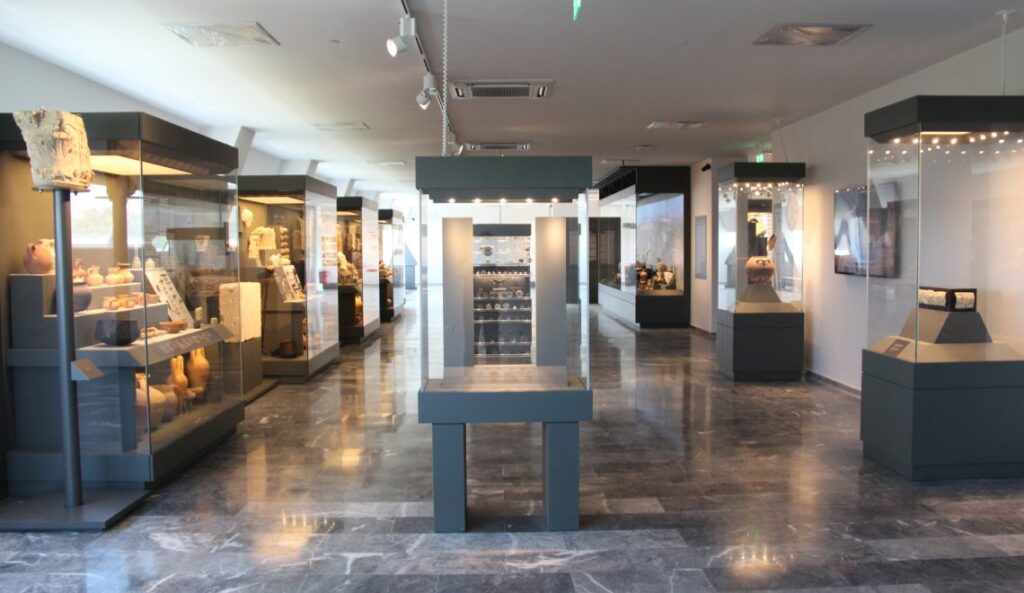 This is the most famous historical monastery in Crete, situated near Rethymnon in a very spectacular location. We do not know the exact date of its founding. Some say it was founded by the Byzantine emperor Arcadius in the 5th century AD, others say the founder was a certain monk Arcadius. The 14th century AD is the most likely date for its founding.

In the 16th century, which is one of great prosperity for Crete, the church of the monastery was given its final from in the baroque style. It was dedicated to Christ the Saviour.

We learn the history of the monastery from travelers who visited it. It was very wealthy in the 18th century AD. Its magazines were full and it was well known for its excellent wine. Its good library was also famous as well as the hospitality of the monks.

The cells of the monastery faced an interior court imitating western monastery architecture. In the north section there were guest rooms. The cells of the monks were in the upper storey, those of the servants in the ground floor. On the upper storey there were also the granaries. The dining hall was a large room where the monks met for supper. Near it there was the kitchen, the bakery, magazines where the flour was kept, etc. Before 1866 there was also gunpowder room in the south end, but this was later moved to the wine magazines for reasons of security. This is a picture of great prosperity. It is noteworthy that both the architectural layout and the function of the monasteries are reminiscent of the Minoan palaces. In both, social, economic and religious activities are combined. Both have central courts for these activities.

The monastery was already in decline in the 19th century. An Austrian traveler mentions only 20 monks and a general abandonment. The books of 500 classical authors were in a deplorable condition and could no longer be read.

The historical importance of Arkadi lies in the role it played in the Cretan War of Independence. When the revolution was declared, in 1866, all the leaders met at Arkadi which was chosen because of its strategic position. Ishmael Pasha sent a message to the monks with the bishop of Rethymnon that the revolutionary committee should leave or else the monastery would be destroyed. The head monk refused to obey. Later the Turks besieged the monastery where many children and women had also gathered. Soon the besieged realized that was little hope but they fought bravely. Some, in fact, blew themselves up with gunpowder to avoid captivity. 114 men and women were taken captives, 864 were killed and very few survived.

Eleftherna is one of the most important cities of ancient Crete. It is built on the hill called Lefterna . The city is alsocalled Elefthera and Eleftherai. Earlier names are the Pelasgic Santra (Satra), Aoros by nymph Aora, and Apollonia by Apollo. However the city is known as Eleftherna by Eleythous Demeter . We do not know when the city was established. Pendlebury discovered Postminoan, portogeometric and many Roman relics. It is believed that the city was established in the geometric period. (c.970 – 820 BC ). The habitants were farmers, merchants, and sailors. The port of the city was Pantoratrio and Eleftherna was marine superpower.

The city had a special relationship with Ptolemean dynasty and the statue of Ptolemy Euergetes (247 – 221 BC ) was placed in the city. Eleftherna was contestant with Knossos. However, in the civil war of 220 BC among the Cretan cities, Eleftherna and Knossos were allies. When there was lain siege immunity of the temple of Dionysos at Teo. In 170 BC, Eleftherna was one of the thirty cities that allied with Eumenes B’.

During the Roman dominion by Caecilius Metellus, the citizens, being confident for their fortifications , resisted to the Roman troops bravely. The city was vanquished by the Romans due to some betrayers. Eleftherna had prosperity after the Roman dominion even until the first Byzantine period, when the Bishopric of Eleftherna is cited at the 4th Ecumenical Synod in 451 AD. In the early 9th century AD, the Arabs ruined the city. We assume that based on the Praktikon of Basileios Boulgaroctonos (980 AD), which cites Bishop of Aulopotamou and not Elefthrnas.

Eleftherna was an independent city and thus had its own coins. On the one side of the coins were have Styrakites Apollo seated on a rock, holding a sphere and a bow. On the other side, we see Artemis a hunter, with her quiver, bow and dog. The dialect that was used in Eleftherna had many predoric linguistic elements.

In Eleftherna, many inscriptions have been discovered, with jural context on the relationship of artists with the society. In the excavations, geometric, Classical and Hellenistic idols and signs of the zodiac were also found. One of the most important artifacts is the upper part of the body of a statue made of limestone. This stature represents a dressed woman an is famous as “The lady of Eleftherna ”. It is daedalic figure and reminds us “The lady of Auxeree”. The lady of Auxeree is a small Cretan Statuette (0,65 metres) that represents a woman wearing Cretan mantle. It is also made of limestone. It used to be exhibited at the small French town of Auxerre, but now it is a Museum of Louvre. Because of the similarity between the two statues, some scholars assume that “The lady of Auxeree” is from Eleftherna as well. 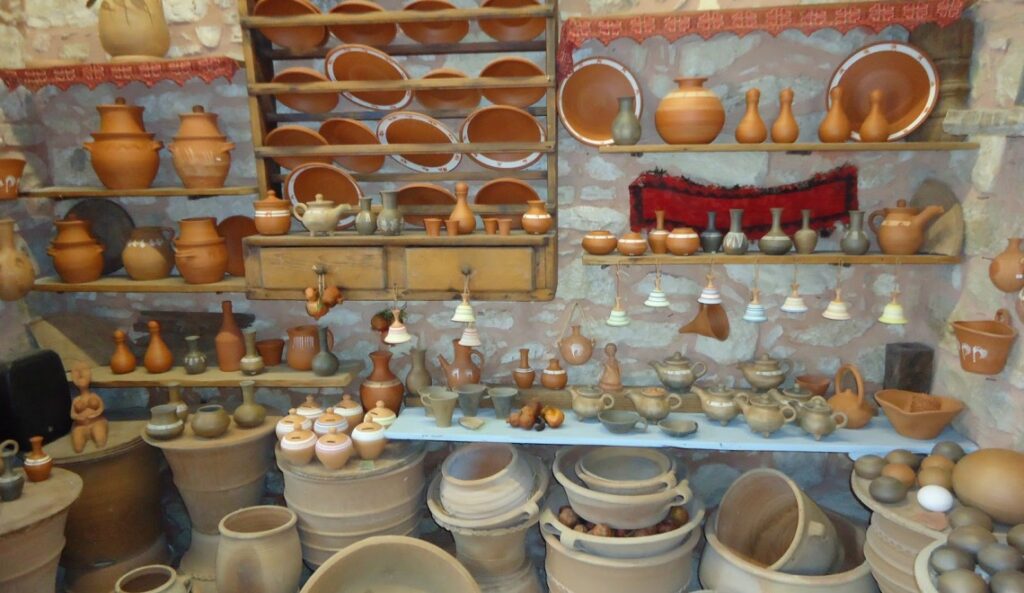 Lies just north of the foothills of Psiloreitis mountain range. It is a pottery-making village, where you can buy anything from a tiny vase to one of the great “pithoi” or storage jars. Most of the potteries lie up the hill from the village in little stone-walled enclosures, each with a cylindrical kiln of plastered stone, crowned with a dome of firebricks. The deep-bellied “pithoi ” are direct descendants of the vessels made by the Minoans. In the village itself are colors washed houses crowded along narrow streets, where each bend reveals a new differently coloured perspective (sky-blue is most popular). There are handsome stone archways in the walls of the lanes and ancient frescoes in the church of Agios Ioannis Prodromos.